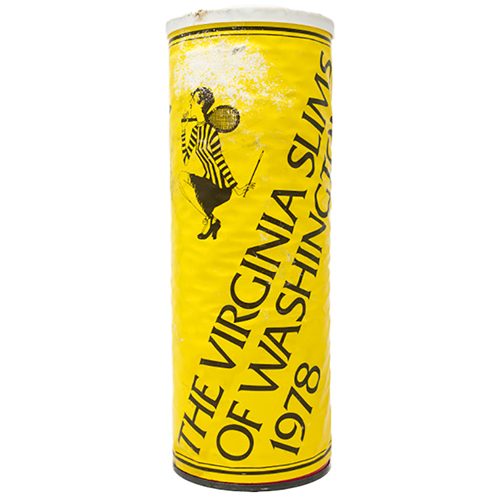 Virginia Slims Tennis, Virginia Slims Circuit
metal can with paper label from 1978 with 3 unknown of Washington tennis ball(s).
This particular 'Type 18 - Pull-tab Metal Can' item is scarce.
mCat 396.225.18.3 Photo(s) courtesy of The Museum at the International Tennis Hall of Fame

Metal tennis ball can. The can in covered with a yellow paper label with an Virginia Slims “Ginny” logo. Text reads “THE VIRGINIA SLIMS OF WASHINGTON 1978”
The Virginia Slims of Washington is a defunct Grand Prix and WTA Tour affiliated tennis tournament played from 1972 to 1991. It was held in Washington, D.C. in the United States and played on indoor carpet courts from 1972 to 1975 and again from 1978 to 1990. From 1976 to 1977 it was played on indoor hard courts and in the final year it was played on outdoor hard courts.
The event was known by several different names. For the majority of its run the tournament was called the Virginia Slims of Washington due to sponsorship with Virginia Slims. It was also known as the Colgate Championships of Washington and the Avon Championships of Washington.
Martina Navratilova was the most successful player winning 9 titles overall.
The tournament was abolished after the 1991 edition when its owners Pro-Serv sold it abroad.