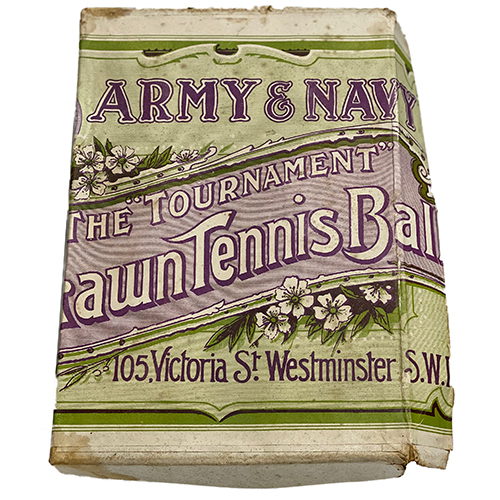 November 30, 2019. The mCat database officially arrived at its one-thousandth item with the addition of  a box of tennis balls sold by Army & Navy Stores Limited. This elaborately designed green and purple box sports an interesting graphic of the company seal. An image of a two men, representing both the Army and Navy, shaking hands while holding a flag from each respective branch of the military. A banner above the men carries the motto “PER MARRE  PER TERRAM” (by land, by sea). A lower banner “UNITATE FORTIOR” (stronger through union). The balls are individually wrapped with tissue paper that is sealed with the company seal.

I find this example container one of the most interesting boxes I’ve ever run across. It certainly has the most elaborate factory seal on a ball.

The Army & Navy Co-operative Society Ltd. was incorporated September 15th, 1871, being formed by a group of army and navy officers. The aim of the co-operative was to supply goods to its members at the lowest remunerative rates.
Army & Navy Stores was a department store group in the United Kingdom, which originated as a co-operative society for military officers in the nineteenth century. The society became a limited company in the 1930s and purchased a number of independent stores during the 1950s and 1960s.
The flagship store was located on Victoria Street in London.

See this container in the database 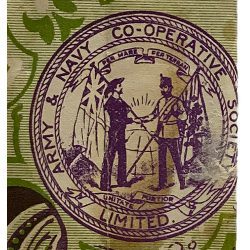 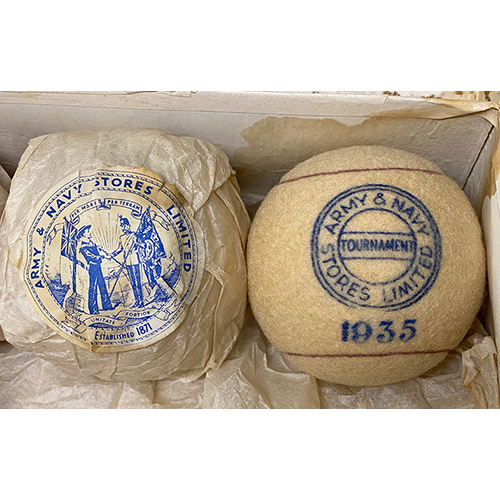